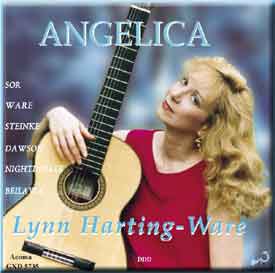 “All the music is very well played and recorded. A fine, ambitious program, with plenty to interest collectors of guitar music and new music." -Fanfare Magazine” US

In search of a common thread for this program, my strongest sense of unification is that many of the twentieth-century pieces evolve from spiritual inspirations with the goal of transcending earthly confines. After solidifying my musical interpretations, I believe that four of the pieces contain messages beyond the notes, rhythms and melodies that comprise music. The spiritual aspects of these pieces made me feel as a type of "messenger" engaged in a non-verbal realm of communication. The music and pure sound, unencumbered by the burden of thought, are the vehicles through which one passes or connects to the metaphysical world. Angelica is derived from the Greek word "aggelos" which means messenger. Universally, angels are distinguished as mediators and messengers between the human and the divine. My hope is that these pieces will reveal their message of transcendence to every open mind willing to make the journey through sound.
Peter Ware’s Elegy opens poetically as a mournful remembrance for a departed soul. The Totentanz is a perky dance of death, representing bodily muscle spasms at the moment of death. Three for Guitar by Bruce Bielawa, is a dream-scape of sound in which fragments of music emerge like disparate images in a dream. Daniel Nightingale’s a la luz de la luna llena translates as "in the light of the full moon". It is the musical description of a transcendental walk along the shores of the Delaware River on a moonlit night. Another New Beginning II by Greg Steinke, draws inspiration from a poem by K’os Naahaabii in which the poet having survived a night of misery is able to rise above in the freshness of morning air and soar with the nighthawk. Doug Dawson’s Baltimore Sonata is a contemporary work which combines traditional classical language and form with jazz harmonies and melodies. - Lynn Harting-Ware

"One of Canada's most accomplished and sensitive classical guitarists is strong proof that creativity remains one of our prime renewable resources."
-Kitchener-Waterloo Record CA

"Her light, almost hypnotic touch of the strings and her highly musical interpretation prove each one of her recordings as new points of reference for guitar performance."
-Jazz & Tzaz, Greece


"Though based in the classical style, Harting-Ware is no snob about what she plays, freely incorporating jazz, and even folk and blues into her playing as she sees fit. On Angelica she displays typically electric approach moving from traditional works by Sor and Sanz to the modern music Steinke’s "Another new Beginning II" and Dawson’s "Baltimore Sonata" which skillfully blends jazz and classical. Harting-Ware has an enjoyable way about her instrument that doesn’t overdo the drama inherent in the tracks. This is apparent on the intimate sounds of "Elegy and Totentanz" and especially on "Three for Guitar" where her lack of overbearing goes a long way in letting the melody breath and drawing the listener in. Guitar fans take note."
-The Herald & News, US

LYNN HARTING-WARE conveys dramatic musical flair, beautiful tone, and a variety of timbres, which enable her to transverse musical styles and venues with great success. Her recordings and concerts blend traditional classical guitar repertory with her own arrangements for guitar, such as Bach's Goldberg Variations and Schumann's Kinderszenen. She has a fresh eclecticism and finds a sense of fun in blending popular styles such as jazz, blues, folk and new age into her concert programs. Following in the footsteps of Clara Schumann, Harting-Ware also composes for her instrument. Her dedication and musicality inspire composers; and she has premiered and commissioned numerous compositions. In 1996, she was honoured with a repertory expansion grant by the Knight Foundation to build a program of 20th century American guitar works. She also works with composer consortiums in presenting music of our century. Harting-Ware has premiered guitar concertos written especially for her as can be heard on the CD Impossible Dream, conducted by Gerhard Samuel. She gratefully acknowledges the support of the Canada Council, Guitar Society of Toronto and Symphony Hamilton for a new guitar concerto composed by Peter Ware. She received a Master of Music Degree from Kent State University and a Bachelor of Music Degree from the University of Cincinnati/College Conservatory of Music.